Parts of this site might work incorrectly because you are using an unsupported version of Internet Explorer. Please upgrade your IE Browser to version IE9 or higher.
X
MENUS:

This document explains the architecture (with emphasis on notifications) of the SNMP agent that implements ND-GARAGE-MIB mib (Garage agent).

Both projects (standalone:GarageC, extension DLL:Garage) are built using the evaluation version of NuDesign Visual SNMP xAgentBuilder9.  You may need to update your Include and Lib directories in project settings to reflect the installation directory of the NuDesign Visual SNMP xAgentBuilder9 on your system. For convenience a prebuild agent and dll are also included in the Sample download.

Note that the MIB instrumentation code is identical in both cases (except for the handling of notifications!).

The ND-GARAGE-MIB consists of a few scalar objects, one table and two notifications.  Here are the definitions that are of interest for this article.

parts per million or PPM).”

after 1-2 hours of exposure.

Thislevel is life threatening after 3 hours.

When the current sampled value is greater than or equal to

this threshold, and the value at the last sampling interval

was less than this threshold, a single event

After a rising event is generated, another such event will not be

generated until the sampled value falls below this threshold and

considered harmless for humans.  35 PPM is maximum exposure allowed by

OSHA in the workplace over an eight hour period.

When the current sampled value is less than or equal to this threshold,

and the value at the last sampling interval was greater than this threshold,

a single event (coLevelFallingAlarm) will be generated.

After a falling event is generated, another such event will not be

generated until the sampled value rises above this threshold and

The trap that the Garage agent sends when it detects that CO level has exceeded the rising threshold is:

A rising-alarm is generated at the agent start-up if the first sampled CO level exceeds the rising threshold.

The trap that the Garage agent sends when it detects that the CO level has dropped below the falling threshold is:

A falling-alarm is generated at the agent start-up if the first sampled CO level is below the falling threshold.

Here is tree structure of the ND-GARAGE-MIB 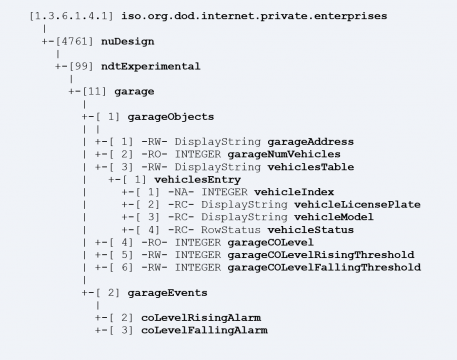 The part that is of interest in this article is the implementation of the CO level monitoring.  The global object sensor represents our carbon monoxide sensor.  It is an instance of COSensor class.  For convenience this class also hosts both threshold levels.  Sensor will be accesed by multiple threads, hence a single-writer/multi-reader locking object is also part of it.

Since this is simulating an agent, we need something to feed in the values for CO level.  COSensorSimulatorThread is used just for that. An instance of this class, simulatorThread, is initialized in the constructor with the pointer to our sensor object.  CO value simulation has the form of a Triangular Wave function; the value of sensor is incremented every interval (default = 1 second) by step value (default = 10).  When the sensor value reaches it’s maximum value (default max = 200) the sign of the step value is changed; i.e. after the next interval the value will be decremented by the step value.  When it reaches zero, the step value’s sign will be reversed; and so on.  All three parameters (maxvalue, step, interval) can be changed in the COSensorSimulatorThread constructor.

The instance of DGarageObjects class, ggarageObjects, is initialized with the pointer to sensor object too.  SNMP requests for coLevel,coLevelRisingThreshold, and coLevelFallingThreshold will be resolved by reading/modifying sensor.  Note that the appropriate lock is used before calling sensor object’s methods (see for example OnGet_GarageCOLevel method).

This architecture decouples the actual task of reading sensor value from the SNMP agent.  SNMP requests are simply fullfiled on variables that represent MIB objects ( sensor object).  Note that the value retrieved through an SNMP request is actually a ‘cashed’ value, and does not reflect the sensor value at the time of the request, but at the last time when simulatorThread updated it.  In other words, it could be off by one second (i.e. the interval used by simulatorThread).

Now, the interesting part: monitoring the threshold levels.  This is done in the MonitorThread class.  Basically, every second (or whatever number of milliseconds is specified as the interval in the constructor) the value of the CO level is acquired and compared with thresholds.  If the threshold is reached/crossed (the value is less than or equal to the falling threshold, or the value is greater than or equal to the rising threshold) a corresponding alarm is generated.

When the condition for sending a trap is satisfied, a trap object is created ( TrapCOLevelRisingAlarm or TrapCOLevelFallingAlarm) and passed as an argument in the call to the SendTrap method:

Both notifications defined in ND-GARAGE-MIB have a single variable specified in OBJECTS clause: garageCOLevel.  Prior to sending, this value is assigned to the trap object:

And that’s all there is to it.  Handling of traps is identical for standalone agents and extension DLLs.

The files also default to a win32 project, but you can easily add a new platform, e.g. x64, by adding it in the Visual Studio configuration manager, once the project has been loaded. There is a section in the NuDesign xAgentBuilder9 help pertaining to this.

The layout of the projects provided by the code generator places all executables in the main directory of their respective sub-project.

The created project files also place in these same directories, the configuration files for the standalone agent and the remote agent.

E.g.
If the project name is ‘Garage’, then ‘Garage.xnv’ is place under EXE and ‘Garage.txt’ is placed under REM.

When a ‘Debug’ target is selected, the projects append a ‘D’ to the end of the name of each of the executables, so that they can reside in the same directory without colliding with the release version. This makes it convenient to test ‘Debug’ and ‘Release’ versions of the code against a single configuration file.

When you add the ‘x64’ platform to the project that same still applies. The final executables are placed in the same directory. It might be advisable to rename the output executable files of each of the sub-projects to avoid ‘colliding’ with the x86 versions of the executables.

E.g.
If the project name is ‘Garage’, rename the EXE output file to be ‘Garage64.exe’

If you are importing to a more recent version of Visual Studio, then due to the placement of executables, you will see a number of warnings from the conversion process. These are mostly related to all sub-project output files going to the one sub-project directory. Typically there will be multiple associated with each but relate to the same problem.

This placement of executables is not necessarily ‘standard’ so when building the project on a newer Visual Studio, you will see related
warnings during the build. Again this is due to the layout of the projects. These too can generally be ignored, except if you have chosen not to rename the output files of your x64 builds, in which case it will act as a reminder to you that you may be overwriting an existing file.